Here’s our pick of the best art exhibitions and events happening in and around Bristol and the south west in September – including ‘Last chance to see’ shows and a look ahead to upcoming features….

Fire: Flashes to Ashes in British Art 1692-2019 finishes on 1 September, while the 167 Open Exhibition and Academican Candidates’ Exhibition start on 29 and 27 September respectively.

In the meantime, you can see the small, free exhibition The Joy of Flowers: Nature’s Living Gems in the Lower Ground Floor Corridor  all month.

“I work in soft pastel, with the end result being bright, bold and contemporary. For me, drawing pictures with bright colours that make people feel better is, and always has been, a really good thing to do. Living in South Devon I’m able to explore this beautiful area of outstanding natural beauty every day, capturing the sea and landscape in my work in all its colours.”

This collection of paintings came out of a group called ‘Shelf life’. The title comes from the use of cardboard packaging (soap, toothpaste, tea and biscuits), which is flattened painted and collaged onto the canvas surface. These cardboard fragments create jutting square and straight edges which form raised creases and folds. Where there are holes in the card these make windows, through which the energetic under-painting is revealed. The collaged painting surface is overlaid with fine linear ink drawings made on transparent rice paper.

Read our Q&A with Lucy Austin here, and meet Andy Phipps of That Art Gallery here.

3) FROM HERE TO THERE AND BACK AGAIN 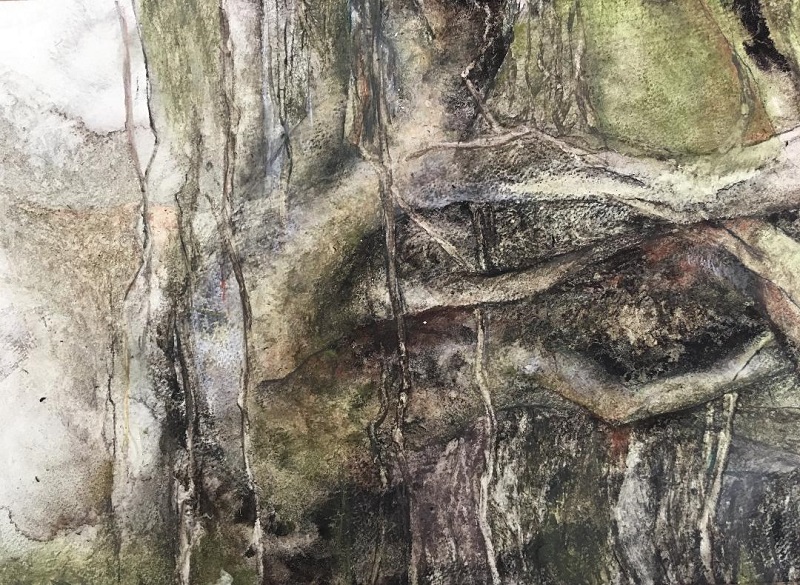 The project is part of the 10 Parishes Festival. It is a collaboration between Greenways Studios in Somerset and another set of studios called Hurstone in Waterrow, Somerset. The two studios are linked by a lovely river Tone walk that also features remains of a Brunel Viaduct. The exhibition will contain work inspired by the walk. There will also be installations along the walk. Work will include paintings, drawings, sculpture and video. This exhibition features two Bristol artists Ulich and Susie Palmer at Venue 1 as well as artists Michael Fairfax, Louise Baker, Chrys Allen, Jane Embelton, Tim Hayward and Paul Leyland.

4) KATE WALTERS: NOTES IN THE GARDEN

Kate’s work is inspired by her strong attachment to animals, plants and wild or beautiful places in nature; including time spent, over the past five years, as an artist in residence at Tremenheere. This time has given Kate ‘insights into the secret life of the gardens’, as well as furthered her strong feelings surrounding the Buddhist concept of ‘interbeing’ and the belief that any diminishment to the natural world diminishes everyone, themes that are explored in this exhibition. Alongside Kate’s work, the exhibition will also showcase invited artists and poets whose work speaks to the themes explored in the exhibition, extending and broadening the conversation. There will be an opening event on Friday 6th September, 6-8pm.

For Bernard Ollis life is a stage where we interact with others, often with unpredictable outcomes. His colourful paintings unite the cities of Bath and Paris in unexpected and delightful ways. Ollis spent his formative years in Bath before studying for his degree in Cardiff in the ‘70s and his Masters at the Royal College of Art, under such luminaries as Hockney, Blake and Hodgkin. After emigrating to Australia, Ollis became Director of the National Art School, Sydney. Since stepping down in 2008 he has travelled far and wide, conducting residencies in many places including Cairo, Shanghai and Antarctica.

One day in the early 1800s, one of the greatest painters that this country has ever produced, visited Bridport Harbour. In a small sketchbook, he captured the now iconic Jurassic Coast cliffs, and a ship being pulled ashore using Bridport rope. A century later, one man spent many days in London at the National Gallery, carefully analysing and copying many of Turner’s paintings. Captain Alfred Percy Codd later gifted those paintings to Bridport Museum, which he founded in 1932.

This major retrospective of the work of artist Augustus John (1878 – 1961) focuses on John’s early to mid-career, examining his reputation and looking in-depth at his achievements in drawing and etching.

REFLECT: 25 YEARS OF SOMERSET ART WEEKS 7 SEPTEMBER-7 OCTOBER Reflect is a group exhibition looking back over 25 years, with work by SAW Members past and present, who have worked with and supported the organisation since the inaugural event in 1994. The Brewhouse, TAUNTON thebrewhouse.net

DRAWING AND SCULPTURE BY JOEL FISHER & DAVE KING UNTIL 15 SEPTEMBER This exhibition pairs artists who have been friends for over 40 years. Key themes of the exhibition are repetition and sequence. Shippon Gallery, CHARDSTOCK https://theshippongallery.com/

EXCHANGE EXHIBITION & RESIDENCIES UNTIL 22 SEPTEMBER Three artists will complete a series of residencies, generating new artwork in response to the theme of Exchange and its potential meanings. Aspex, PORTSMOUTH aspex.org.uk

1 SEPTEMBER Art for Good Installation artist Anthony Garratt, Newlyn School of Art and The National Trust have invited members of the public, from beginners to practising artists, to join them in creating a record attempt for the most people painting a landscape outdoors in the same place on the dramatic coastline between Land’s End and Sennen, West Cornwall. Proceeds will go towards new stone footings to preserve this coastline path. Read more about Anthony Garratt here.

7 & 8 SEPTEMBER Bristol Faces – Two day event at HOURS showing work in progress on the next stage of the Bristol Faces project and some of the portraits completed so far. http://www.hours-space.com

If you would like an exhibition or artist to be listed please email laurel.smart@blueyonder.co.uk and we will consider it for inclusion.